The Whitest Paint Ever Comes

"The black in front of you is not black, what exactly do you mean by white." So, how do we define white?

White is the color of snow, walls and milk. The Most High God (Jesus) said that there should be light, but in fact white light already contains light of various colors. In hexadecimal color codes, #FFFFFF stands for pure white. And white can also represent a feeling that keeps you cool in midsummer.

The Whitest Paint Ever Comes

In science, the definition of white is related to reflectance. Generally speaking, an object is considered white when it reflects 80% or more of all wavelengths in the visible spectrum. 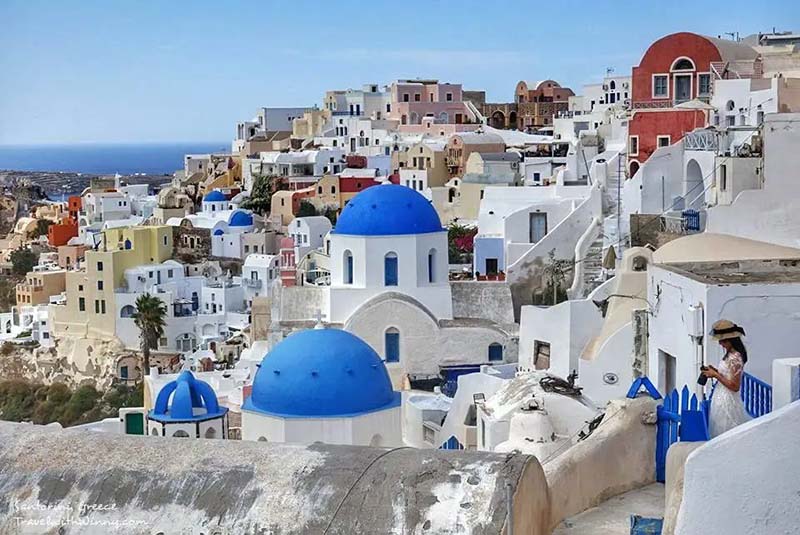 The whiter the substance, the more light it can reflect, and the less likely it will heat up. Scientific common sense is passed on from generation to generation in the form of life experience, people in the tropics often paint their houses white, and the white buildings in Santorini, Greece, are not just for beauty.

In 2021, Purdue University developed an ultra-white paint containing barium sulfate particles with a reflectivity of 98.1%. In September of the same year, it was included in the 2022 edition of the Guinness Book of World Records, rightfully becoming the whitest white paint to date. paint.

When used on roofs and sidewalks, the coating can keep outdoor surfaces more than 4.5°C cooler than ambient, reducing air-conditioning demand and mitigating the urban heat island effect, even in winter.

Xiulin Ruan, a professor of mechanical engineering at Purdue University who participated in the study, cites a real-life example: If you use it to cover 1,000 square feet (about 93 square meters) of roof area, we estimate that you can get up to 10 kW of cooling power. This is more powerful than the air conditioners most homes use. 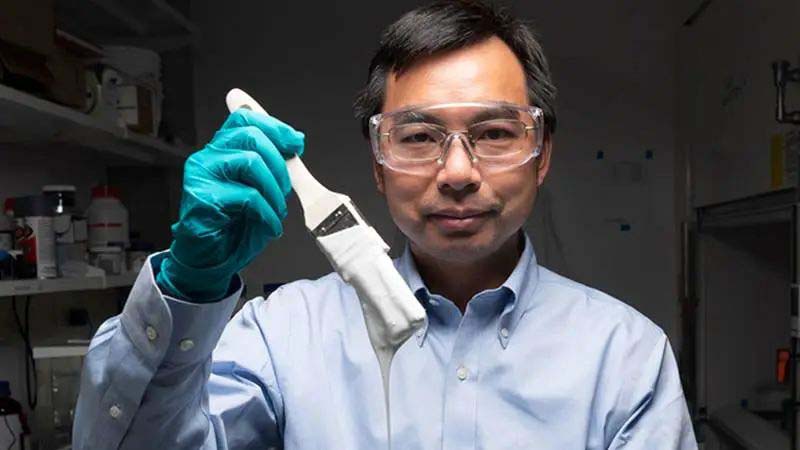 The researchers even suggested that just 0.5-1% of the Earth's surface could be covered with the paint to reverse the trend of global warming. Recently, the same group of scientists developed a new formulation that is thinner and lighter, or the world's whitest paint 2.0, which also reduces surface temperature. 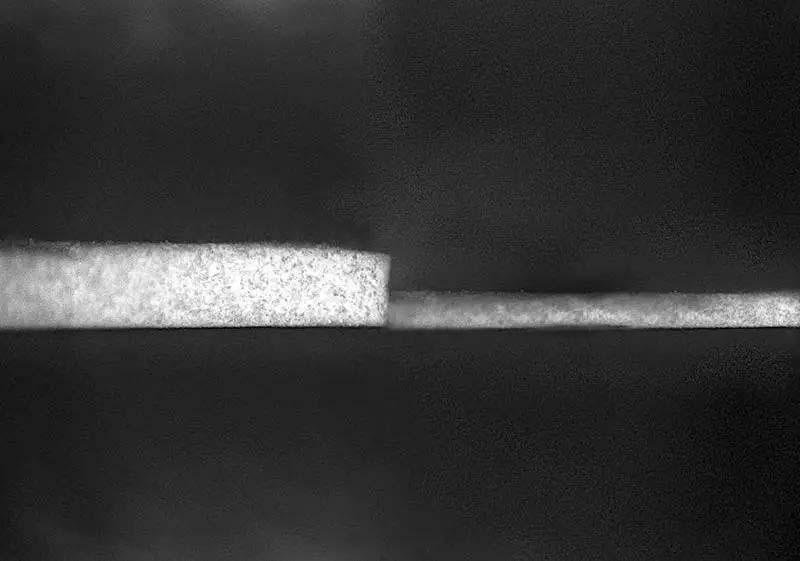 Why should white paint be made lighter and thinner? The main reason is that the usage scenarios of 1.0 and 2.0 are different - when 1.0 came out, in order to achieve an adequate level of radiative cooling, the paint needed to be at least 0.4mm thick, which was perfectly acceptable for structures like building roofs.

But when looking at objects with precise size and weight requirements, such as cars, trains, and airplanes, where coatings need to be thinner and lighter, 2.0 is the time to play. 2.0 is a nanoporous paint containing hexagonal boron nitride (a substance mainly used in lubricants), and takes only 0.15mm to achieve a reflectivity of 97.9%, which is almost the same as 1.0's 98.1%. 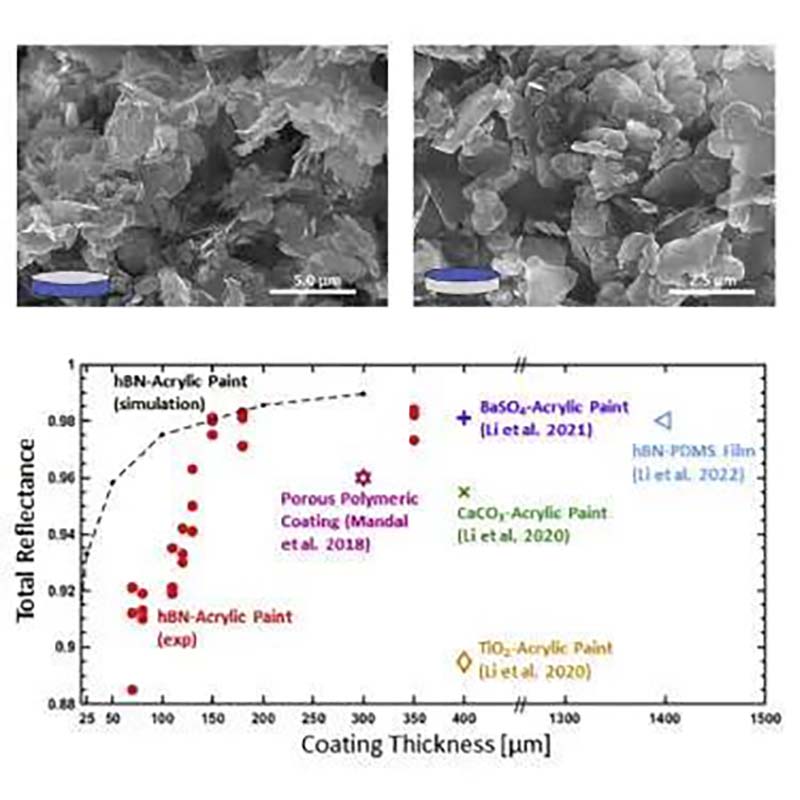 Approximate reflectance, 2.0 is thinner than 1.0

The 2.0 is also highly porous at the nanoscale, due to its lower density and thinner thickness, it is 80 percent lighter than the 1.0. The lighter 2.0 will be used in a variety of lightweight scenarios, where it can reduce surface temperatures by about 5.6°C when sprayed on the exterior of planes, cars or trains. In the sweltering heat, the aircraft on the tarmac does not have to turn on the air conditioner to cool down the interior, which can save a lot of energy. 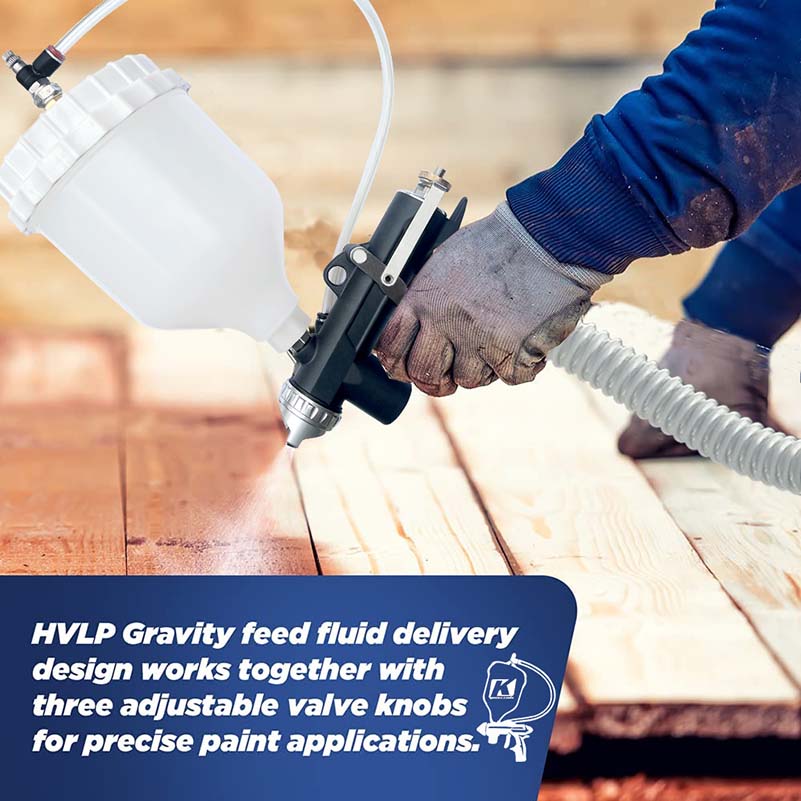 2.0 is expected to be commercialized within two to three years, but will require a range of testing and refinements, such as minimizing the use of volatile organic compounds (VOCs). Paints, varnishes, and other products contain organic solvents, which release VOCs during use. Formaldehyde is one of the most well-known VOCs, which is harmful to health and the environment. 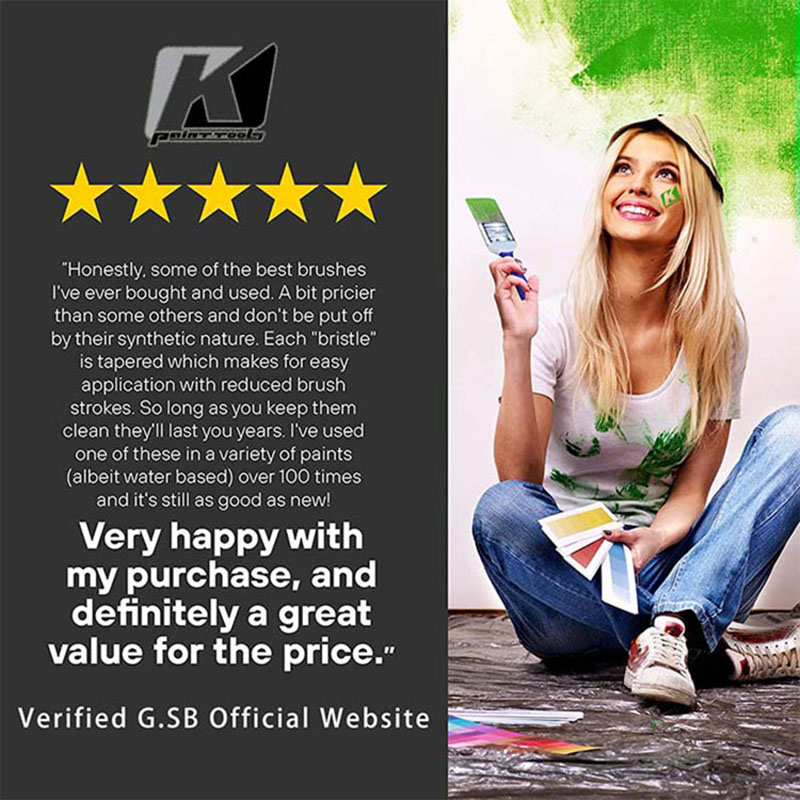 Professor Ruan Xiulin also envisions the infinite possibilities of 2.0 beyond the transportation industry, where clothing, shoes, and even portable electronics such as mobile phones can be used: "It can be incorporated into paint or textile fibers, brushed, sprayedor applied on a roller. " 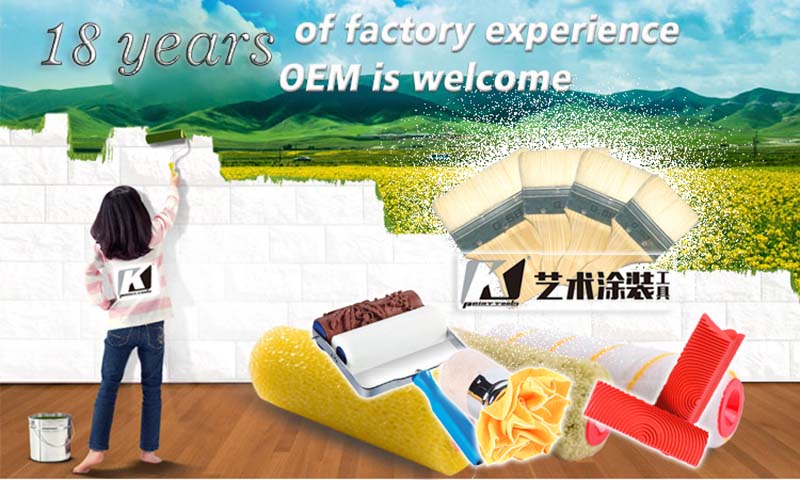 However, even if 2.0 is really commercially available, the price will never be cheap, because boron nitride needs to be synthesized and produced, so it is more suitable for scenarios where you don't care about the cost, but "care about" weight and thickness.

The whitest paint is also the cool paint

The whitest paint, 1.0 and 2.0, has almost the same reflectivity, not replacing each other, but each has its own merits. After all, breaking the record for the whitest paint isn't the goal of scientists, it's to curb global warming and conserve energy.

Since the 1970s, many scientists have tried to develop radiative cooling coatings to replace traditional air conditioners and avoid falling into a vicious cycle of global warming that gets hotter and hotter.

It took the Purdue team six years to develop 1.0, and they considered more than 100 different materials, eventually narrowing them down to 10, testing about 50 different formulations for each material. The white paint sold on the market has a reflectivity of about 80% to 90%, and the common raw material titanium dioxide absorbs ultraviolet rays and radiates heat, so the surface of the building cannot be allowed to be lower than the ambient temperature. 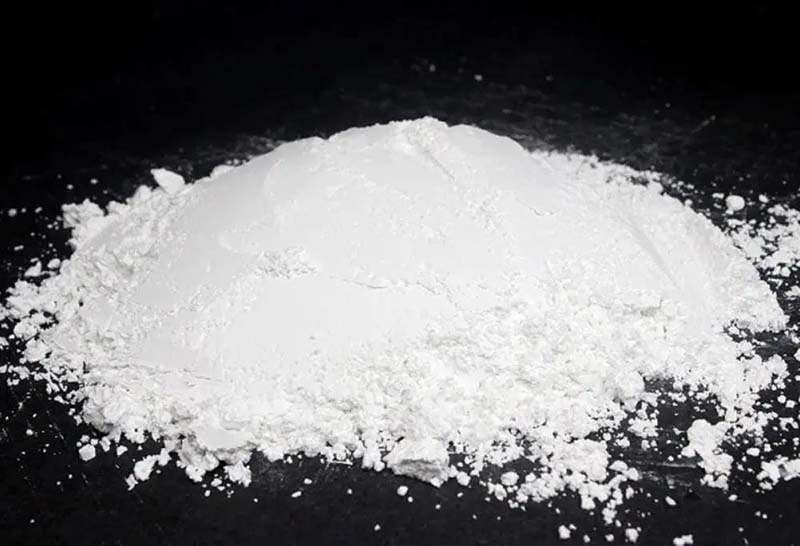 1.0 relies on two key technologies. On the one hand, high concentration of barium sulfate is used as the main component to better reflect sunlight and does not absorb ultraviolet light; on the other hand, the degree of particle scattering depends on the size. It can reflect different colors and wavelengths of light to achieve the widest spectrum scattering effect.

In addition to being nearly 100% reflective, the nanoparticles also reflect solar energy at specific infrared wavelengths of 0.008-0.013 millimeters, allowing heat to return to space through the infrared window without being trapped in Earth's atmosphere. Ultimately, it emits more heat than it absorbs, thus fighting global warming. 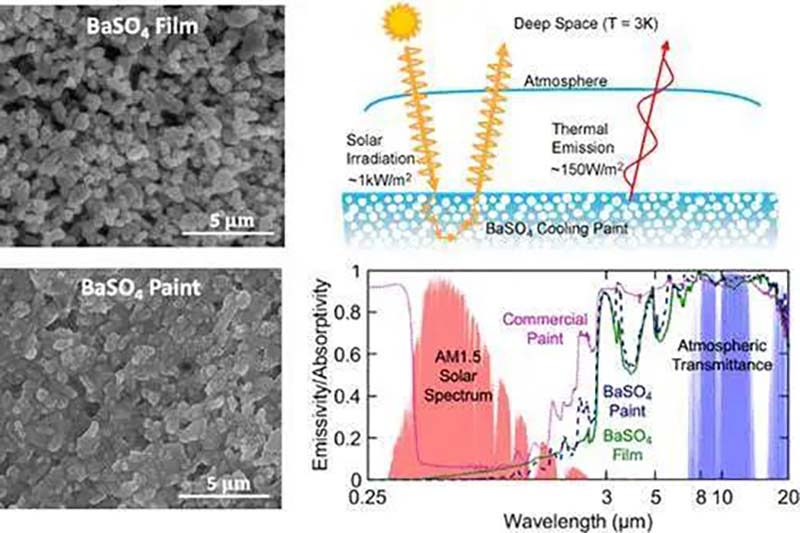 This "passive radiant cooling" cools the surface of the building without consuming any energy, which is equivalent to installing an air conditioner that consumes no electricity. As you can see from the image from the IR camera, the area where the 1.0 is located is a deep purple color that is very different from the surrounding color, indicating that it cools the board to below ambient temperature, something that commercial thermal coatings cannot do. 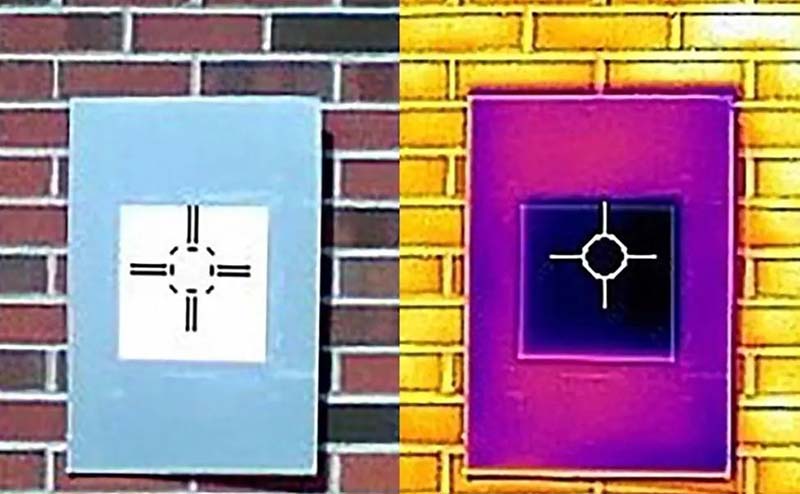 The relative availability of materials is also an advantage of 1.0. Barium sulfate is cheaper than titanium dioxide, and the final cost may even be comparable to traditional white paint. The work has been patented, and Purdue is working with a company to scale up the paint and bring it to market, with the prospect of commercialization within two years. But 1.0 is also far from perfect.

Ronnen Levinson, an expert on the heat island effect at Lawrence Berkeley National Laboratory, pointed out that after being reflected, ultraviolet rays are likely to react with substances such as nitrogen oxides in the air, which can harm air quality.

A report by Fast Company mentioned that nearly 60% of the raw material for this coating comes from barite ore. Mining means huge energy requirements and carbon footprints, which run counter to environmental protection goals and are caught in a dilemma of positive and negative.

In fact, before 1.0, Purdue University also launched a version. In October 2020, they developed a white paint with a reflectivity of 95.5% using calcium carbonate as a raw material. Calcium carbonate has long been replaced by 1.0 barium sulfate; 2.0 hexagonal boron nitride has expanded the usage scenarios of 1.0. "The Whitest White" is only a temporary false name, technology continues to improve, and there may be 3.0 and 4.0. If you want a real environmental protection answer, you must start with 70 points and 80 points.

With the whitest white, don't forget the blackest black

A few years ago, the blackest black was Vantablack, which absorbs up to 99.965% of visible light. It was invented by British technology company Surrey NanoSystems and was a surprise when it was released in 2014. The full name of Vanta is vertically aligned nanotube arrays, which means vertically aligned nanotube arrays, with about one billion nanotubes per square centimeter of coating.

It is so strikingly black because of the evenly distributed nanotube structure, light particles that enter are absorbed and very few that are reflected hit the top of the nanotubes. In front of two identical bronze statues, when one of them is painted with Vantablack, it changes directly from three-dimensional to two-dimensional. You are not staring into blackness, you are staring into the abyss.

When Whitest Paint 1.0 came out, researchers compared it to Vantablack. After all, one is too black to dominate the crowd, and the other is too white to dominate. There was also a Vantablack-related episode at the time: researchers were warned to watch out for Anish Kapoor.

Anish Kapoor is a British artist who gained notoriety in the art world when he took the exclusive artistic rights to Vantablack in 2016, allowing only him to use it for artistic purposes. The most violent reaction to this was another British artist, Stuart Semple, who developed the "pinkest pink" paint in a fit of anger and put it on the website, where anyone can buy it, except Anish Kapoor. 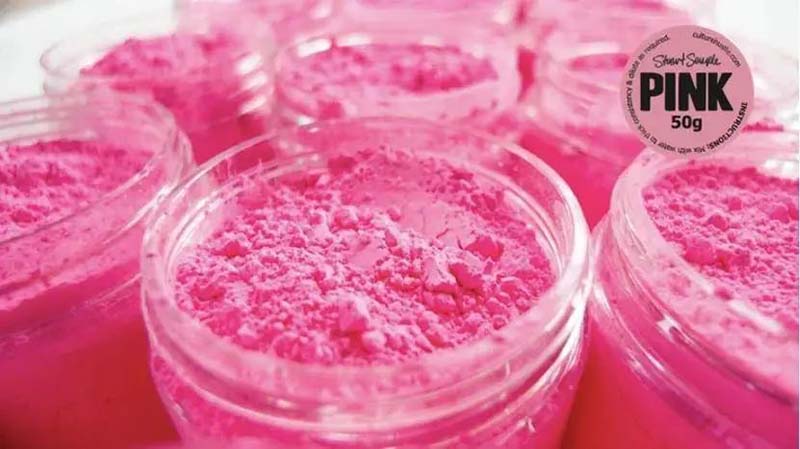 Recently, a Japanese internet celebrity wanted to challenge the "darkest room in the world", but couldn't buy Vantablack, so he decided to buy the paint "True Black Warriors" with a light absorption rate of 99.4% ("Dynasty Warriors"). : play money). He also painted himself completely black, seamless cos Conan's Man in Black. 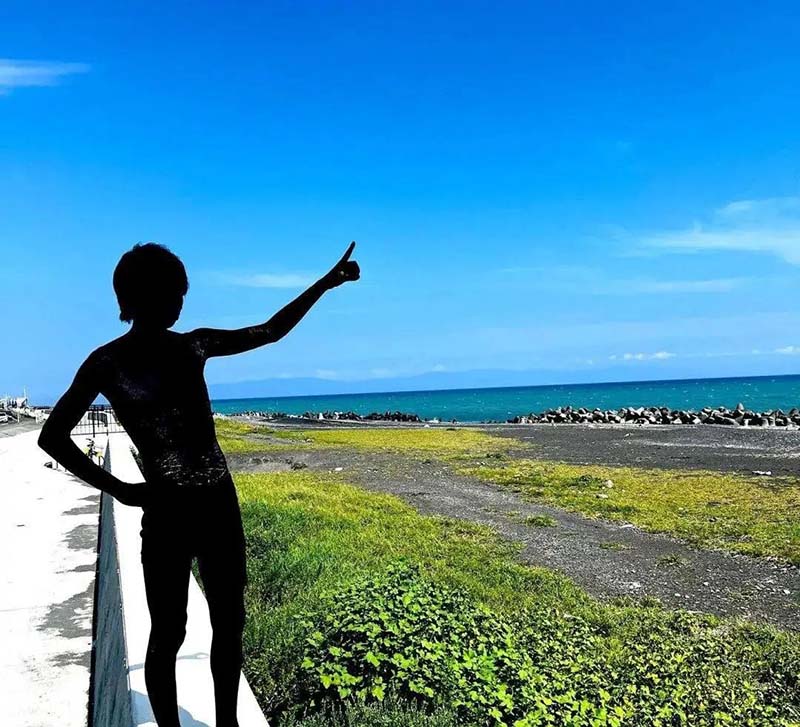 But now Vantablack is not the darkest either. In 2019, MIT developeda material that absorbs 99.995% of visible light, and best of all, scientists collaborated with artist Diemut Strebe to make it appear in the form of a diamond. When the brightest "stone" meets the most light-absorbing material, the $2 million natural yellow diamond is completely hidden into darkness, so it is named "The Redemption of Vanity".

Diemut Strebe and MIT also wrote next to the diamond: "This project can also be seen as a statement against Anish Kapoor's purchase of the exclusive artistic rights to Vantablack. We used a different composition of carbon nanotubes that any artist can use." Art and Aesthetics aside, the darkest blacks are mainly used on surfaces that have a very low tolerance for reflected light, such as astronomical telescopes, microsatellites, star trackers, infrared sensors, and are also thought to be useful in stealth aircraft.

NASA is also working on super black materials in space

The development company of Vantablack once proposed that the whitest white and the blackest black be displayed together in the museum. In order not to violate the exclusive artistic rights signed with Anish Kapoor, they also emphasized that "this is not art", but "educational". Purpose," for those interested in the science behind the extremes of light and darkness. "Science can create a medium for art, and art can also give back to science." From the whitest white to the blackest black, the palette of scientists also affects the future of mankind.

Next: Paint walls in color: tips & tricks for colours, stripes and patterns 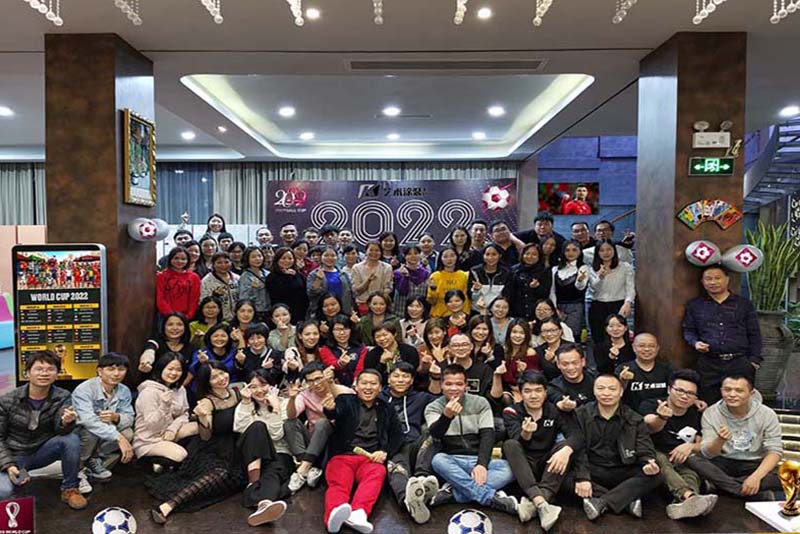 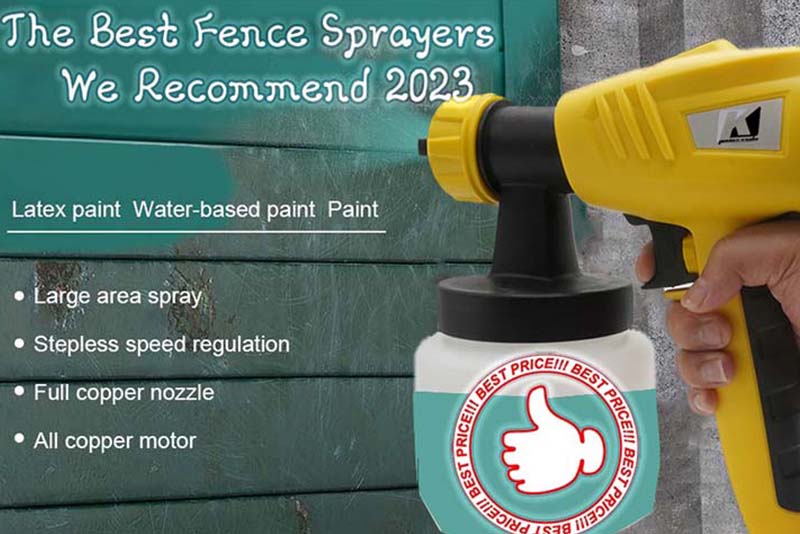 The Best Fence Sprayers We Recommend 2023 Many people have researched and tested the best fence spray...